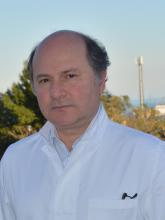 From 1983 to 1989 he had been Student Fellow at the Institute of Human Anatomy of University of Catania. In 1986 he had been Visiting Fellow at the Department of Gastroenterology and Hepatology of the Royal Free Hospital at City University, in London, directed by Prof. N. Mc Intyre. In 1991 he was awarded a scholarship from the Ministry for Universities and Scientific and Technological Research, for specialization abroad. In 1994 he was appointed University Researcher of Human Anatomy at the Faculty of Pharmacy of the University of Catania. From 1995 to 2000 he had been Visiting Fellow at the Institut des Maladies of the Appareil Digestif of the University of Montpellier, directed by Prof. Jacques Domergue, and participated on a program in the field of clinical anatomy research applied to video surgery. In 1997 he had been Visiting Fellow at the Experimental Surgery Laboratory of the Faculté de Médecine Paris Sud-Université Paris XI, where he has performed video-assisted dissections on animal models. In 1997 he obtained from the University of Paris Sud the "Diplome inter-universitaire of digestive surgery par voie coelioscopique", with a final thesis on “Laparoscopic anatomy of the right hepatic artery and its branches”. In this period he received also a grant from the National Research Council for the research on “Laparoscopic anatomy of the hepatic peduncle”.

In 1999, he moved from the Faculty of Pharmacy to the Faculty of Medicine and Surgery at the University of Catania, where he was appointed Confirmed Researcher for the Scientific Disciplinary Sector of Human Anatomy. In 2000 he had been Visiting Professor at the Laboratory of Experimental Anatomy Faculty of Medicine Montpellier-Nîmes, University Montpellier, directed by Prof G. Godlewski, and at the Laboratory of Experimental Surgery directed by Prof. P. Rouanet, where, until 2004, he teaches Clinical Anatomy at the Euro Mediterranean School of Endoscopic Surgery in Montpellier.

Prof. Sergio Castorina is Reviewer of many international journals and conferences, Fellow of the American College of Surgeons and Honorary Foreign Member of the French Academy of Surgery. He was involved with several national funded research projects. His research is mainly focused on clinical and surgical anatomy, microscopic anatomy, immunohistochemistry, and molecular anatomy applied to the oncology. He published more than 116 scientific publications in the field, his h-index is 20 and total citations are 1432 (according to Scopus). He is President of “G.B. Morgagni” Clinical Center and Scientific Director of the Molecular Anatomy Laboratory of “GB Morgagni Mediterranean Foundation”. Since 1994, Prof. Sergio Castorina operates as surgeon at C.C.D. “GB Morgagni” in Catania. Its surgical activity includes general, digestive, oncological and bariatric surgery with particular specialization in minimally invasive procedures with laparoscopic approach.